Many people struggle with Depression and wonder if TMS is the right fit for them. This overview shows how TMS works, statistics around recovery and what it could do for you.

TMS data is based on patients treated at our center since 2011, with the average patient having failed 9 med trials. Medication data based on STAR-D data, National Institute of Health, 2010, with the average patient having failed 4 med trials. In the chart, Response follows the FDA definition and includes both those in remission and those whose depression is half better. The Remain Depression Free data is only for those patients who reach remission and does involve some form of continuing treatment in some but not all cases.

No medication needed for treatments.

No medication needed for treatments.

What Makes Us Different at Southern Colorado TMS Center?

TMS treatment for Major Depressive Disorder involves a series of 17-minute sessions.  During treatment you will be under the constant care of your TMS Technician and supervised by our Medical Director. You can relax and speak with your TMS Technician whenever you wish. You may also read, listen to music, and watch movies or even funny cat videos. We also have a selected list of informative and interesting Ted Talks and related videos  encouraging recovery from depression.  A family member or friend may be present.

A typical course of TMS treatment for depression consists of 5 treatments per week, for 6 weeks. When TMS is used for other diagnoses, only 5 to 10 treatments may be required. After each treatment session you are fully awake and alert and may immediately return to your activities of daily life.

Following successful treatment, maintenance sessions (e.g., 1-2/month) may be recommended to reinforce your progress for the next several months. Many patients have found that only a few or even no follow up treatments are necessary. Many successful TMS patients  are able to taper off many if not all of their medications in the weeks and months following TMS. 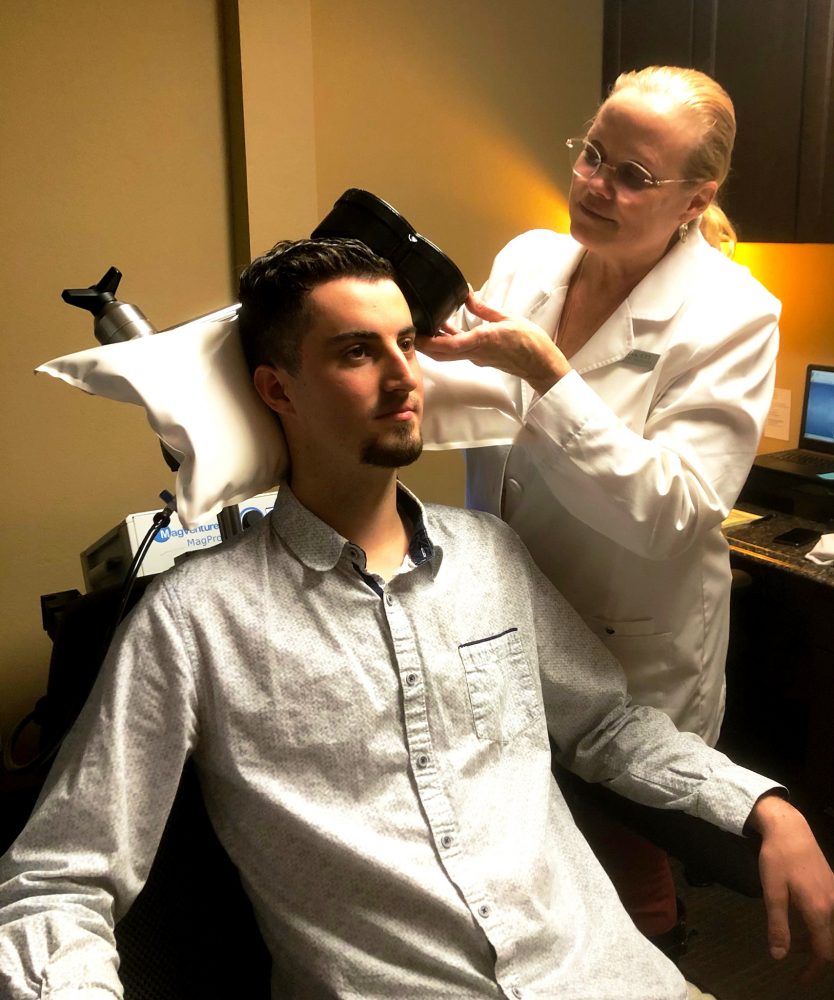 The Science of TMS 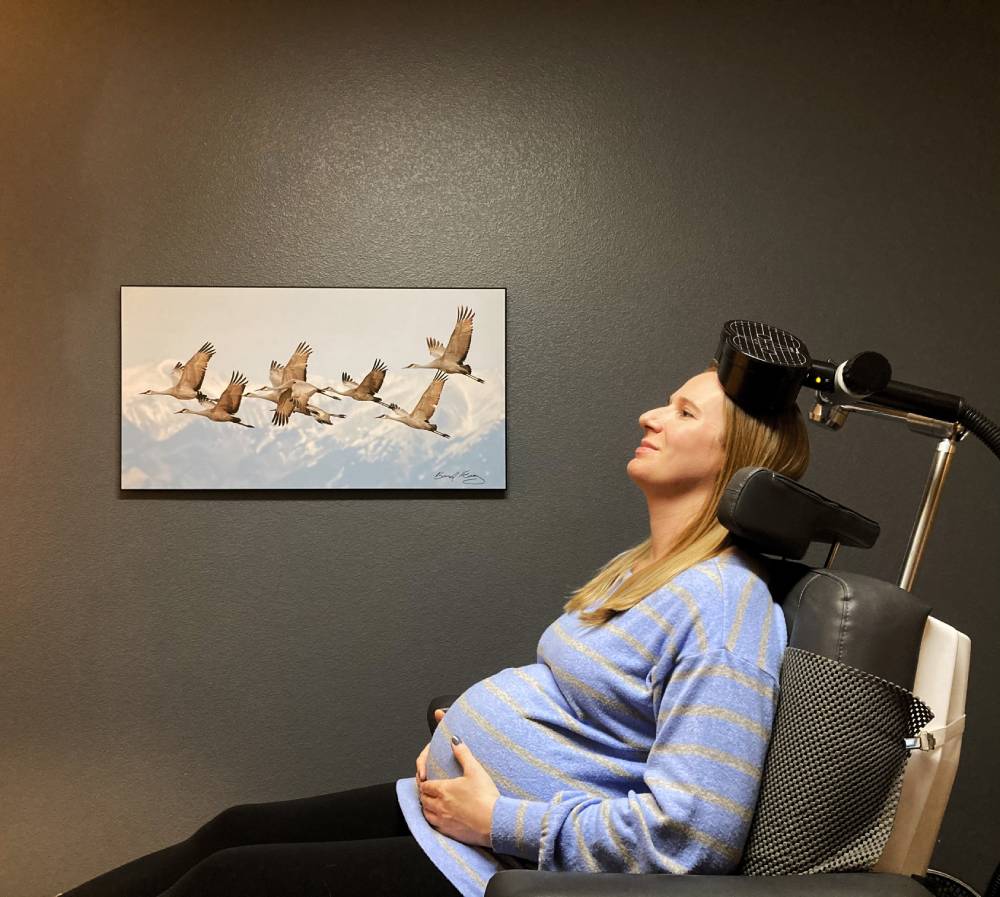 During TMS therapy, an electromagnetic coil is placed on the head over the left prefrontal cortex (the area near where your forehead ends and hair starts), an area of the brain known to be involved in mood regulation. The coil produces a pulsed magnetic field using the same magnetic energy as any MRI machine. This magnetic energy passes non-invasively into the head and stimulates the nerve cells in the area of the brain beneath the coil. The net effect is to help the area of the brain that has become sluggish to become more active and to stay more active over time.

In the late 1990’s, physician-scientists began exploring the potential of TMS therapy for the treatment of a variety of diseases, and especially depression. More than 75 randomized, controlled trials of TMS therapy as a treatment for depression have been published by investigators around the world. In 2006, the largest randomized, controlled study ever conducted with TMS therapy was completed in patients with major depression, demonstrating its safety and efficacy for this use. The FDA then cleared the treatment for use in the USA in 2008 and we have been conducting TMS treatment since 2011.

Since 2008, the FDA has now cleared 8 different TMS therapy systems, made all over the world.. We have actively researched all of these and have actively studied and used 3 of these systems for over a year. On the basis of this study and experience, by 2015 we had purchased 2 TMS devices made by a Danish manufacturer, the Mag Vita TMS therapy system, FDA-cleared in 2013.  We chose the MagVita system on the basis of effectiveness, ease-of-use and patient comfort and we have not been disappointed.

How Much Does TMS Cost?

The amount that you will pay depends on (1) your insurance co-pay amount and (2) your annual deductible amount remaining at the time of TMS treatment. All commercial insurance companies cover TMS treatment for depression, as well as Medicare, TRICARE and the VA. Colorado Medicaid does not yet cover TMS.

In most cases, TMS treatment for conditions other than depression is not yet covered by any insurance. However, we are committed to working with you to find a way to make TMS treatment affordable, whatever your diagnosis.

We will do our best to give you an accurate and complete estimate of your financial obligation and will give this to you before you start TMS treatment. We are glad to file for insurance prior authorization for you, so you will know as best as can be determined where you will stand financially. We are able to offer a limited number of patients a reduced payment plan. Please discuss this matter with us.